The first record of Highworth Silver Band is a mention in the North Wiltshire Herald which published an article including "the Highworth Brass Band paraded the streets and played selections of music very creditably". This was for Queen Victoria's Golden Jubilee celebrations in 1887.

Since then, the band has continued, supporting itself by subscription, performance and occasional grant or charity augmentation.

There has been at least one period when band activity was suspended - just before World War I it is noted in band records - but the band remained in existence, retaining its property; music, instruments and uniforms and resumed its activities afterwards.

It was not until 1925 that the band decided to become an orthodox brass band. Hitherto there had been clarinets and other wind instruments. It is not known, but likely, that this was the time when the name changed from Highworth Brass Band to Highworth Silver Band. The instrumentation change enabled the band to enter Brass competitions, which it did from the 1930s to the 1990s, gaining many good results in fourth and third section contests.

The band's first female member joined in 1947, followed by many since. There have been junior bands and training classes from time to time.

In 1964 the band bought its own premises, a redundant Wesleyan Chapel, providing a dedicated practice space with storage for band equipment, music, uniforms etc. Previously, rehearsals had been in Highworth public houses. This purchase helped the band to flourish and ensured its survival.

The band celebrated its centenary in 1987 with a very active and successful year which enabled a complete replacement of uniforms.

Highworth Silver Band thanks Jackie James from whose 1986 article (published in A History of Highworth, Part 2) all of the above is drawn. 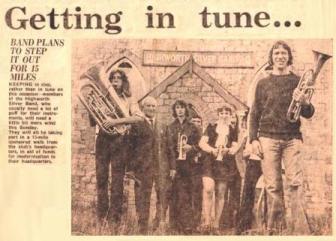 Cutting from the Swindon Advertiser July 1974 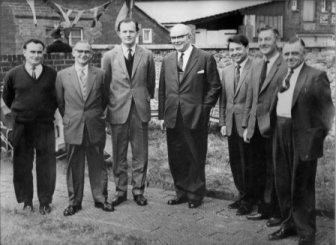 (from left to right)

Where can you see us next?